What is an overland flowpath?

This term describes the path followed by rainwater during a storm event.

Overland flowpaths, just like natural streams, collect and convey rainwater but only flow for the duration of a rain event. They are critical to the effective drainage of an area. It is common urban myth that streams are no longer necessary when development occurs and rainwater is drained by pipe systems.

Underground pipes are limited in their capacity and ability to deal with large rain storms. Pipes rely on surface inlets such as grated covers in streets, and roof gutters and downpipes to collect rainwater and convey it into the pipe network. However these systems are easily blocked by storm debris and are only big enough to cope with rain events which occur relatively frequently.

What is a one in one hundred year storm?

When describing the intensity of storms, it is usual to use the expression “a one in ten or one in twenty or one in one hundred year storm event”. The larger the number, the more intense is the rain, the greater the volume of rainwater generated, and the more severe the effects.

For example, a one in one hundred year event will generate about twice the amount of water which might flow from a one in two year storm. Urbanisation will increase the amount of rainwater generated in a storm event by a factor of two to three over that which existed when the land was in bush or pastoral cover. It can be readily seen that an urban area in a severe storm event will have to cope with four to six times the flow that might have been generated by the same storm when the land was “undeveloped”.

Depending on the size of the catchment area, that can translate into water flows which can amount in a developed urban area to tonnes of water a second.

Because underground pipes can only cope with relatively small rain events, we need areas where overflow from these pipes can run, that won’t flood houses or damage property. It is important during a storm that rain can get to streams and wetlands as quickly as possible so as not to flood houses. Overland flowpaths are designed to convey the rainwater generated in an extreme storm event. For that reason it is essential that they remain clear and are not blocked with fences or other structures. Fences can be readily smashed by water pressure and the danger is that while the water is building up against the fence or other obstruction it may be diverted away from the predicted path and cause un-wanted damage elsewhere.

How can I tell if I have an overland flowpath on my property?

Auckland Council has mapped all of the overland flowpaths in the region and has made this information available to everyone on their website.

Click here to view the GIS Viewer and look under Environment – Catchments and Hydrology for an indication.

What do I do if there is an overland flowpath on my property?

If a property is shown to have an overland flowpath on it there are a number of things that you can do. If the path is shown well away from your house or any other buildings on site you will not need to do anything. If you wish to develop your property in any way by installing fences, a garden shed, house extension, retaining wall, or new garage it is essential that the potential run-off is credibly estimated and the area of land and route occupied by that run-off is determined to ensure that any structure erected on the land is protected from the effects of the run-off. We can help you do this by providing you with an Overland Flowpath Report. Contact us today.

We have a team of Engineers highly experienced in flood engineering. For any questions on overland flowpaths or flood assessments for your property please contact us today. 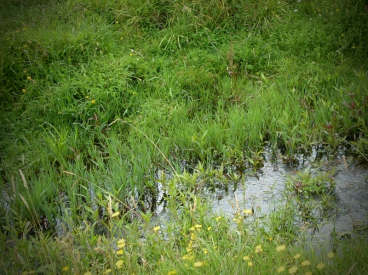 Glossary
Overland flowpath – the route followed by a stream of water flowing down to a river or harbour outlet. Usually along a continuous depression similar to a natural stream
Catchment area – the area of land that slopes towards the low point that will constitute a stream whether natural or man-made. Usually measured in hectares for larger areas and square metres for smaller areas.
Run-off – any rainfall generated by a rainstorm and conveyed away in pipes and overland . Usually measured in litres per second or for larger flows in cubic metres per second.
Impermeability – the surface of the land within a catchment area is divided in natural soil – permeable and that covered in roof, roadway, and other concrete or asphaltic covered areas. The extent of impermeable surface will affect the run-off generated by a particular storm event.
GIS layer – Geographic Information System. A system of maps which can be overlaid providing a range of information on land related issues. For stormwater, the layers are overland flowpath showing the route and magnitude of the flowpath. Flood plains are a companion layer which in conjunction with the overland flowpath layer can indicate the potential extent of flooding in a one in one hundred year event. The two layers need to be applied simultaneously to determine if the issue to be resolved is merely overland flow or whether a flood plain analysis is required.

What To Look For When Choosing A Planner For Your Next Development
June 15, 2022

5 Categories Of Plants To Consider For Your Landscape Design
March 17, 2022
Recent Jobs and News
Archives
Go to Top